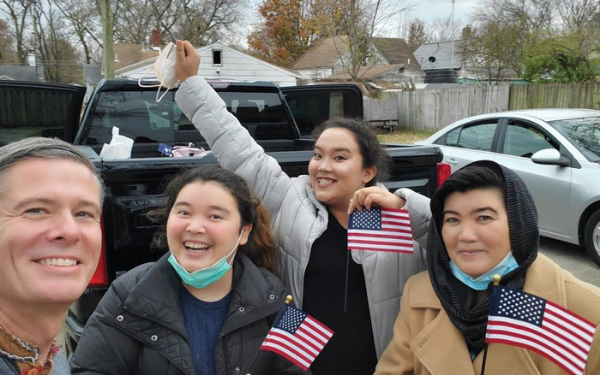 A Trek from Afghanistan

Last week, I had a heart blowing conversation with Zahra Nazar and Andy Bass about her family’s escape from Afghanistan. All I can say is that if we had millions of caring souls like Zahra and Andy, our world would be so much healthier and vibrant. I am sharing their story here with the hope that if you feel called, you reach out to them or share their story with anyone who can make a difference.

Andy Bass is a former Marine and long-distance runner who competed in races in North Korea, Lebanon, Russia, Uganda and Russia. In 2019, he committed to run the Marathon of Afghanistan, a 26.2-mile race that takes place in the Bamyan region. Andy decided to arrive a week earlier to get acclimated to the city’s elevation of 9,000 feet.

When he arrived, he met a fellow German runner and they decided to explore together. While walking around the town, they came across a women’s market, which was surprising. There he met three incredible women:

Andy learned that the three know firsthand the importance of community and the power of supporting each other during uncertain times. They faced much together. While life has provided so many challenges, they saw opportunities in everything as they always focused on what’s possible despite their world telling them that as women, they didn’t have any rights.

When the situation accelerated in Afghanistan a few years later, Andy received a message from Zahra through Facebook that her name might be on a Taliban kill list. Due to her advocacy for women, she became a target. When he learned about this, he knew he needed to help. An article outlines the harrowing experience and here is an excerpt:

“When the situation began to deteriorate after the U.S. started the process of pulling out troops, Bass grew worried for his friends … For Bass, the decision to help the women was an easy one. “You spend five minutes with them, and you just fall in love with them,” Bass says. “I thought, If I can help, I should.” Once the women arrived at the Kabul airport, they arranged for Bass to help them obtain their visas.

But the Taliban had arrived, too. The airport was crowded with thousands of Afghans trying to escape to safety. The Taliban gathered around the perimeter. From the airport, the military lobbed flash-bangs and tear gas to maintain control of the crowd. The women were caught in the middle.

Zahra sent a message to Bass: It’s crowded. It’s scary. I don’t think we can enter. Bass told them to be strong. He told them he would try to find another gate for them. Bass tapped his contacts, looking for a different entry point.

“If Mr. Bass wasn’t with us in Kabul, especially in Kabul airport, we couldn’t [tolerate] it,” Zahra says. “We thought, We don’t have anyone to help us. We are completely alone. But Mr. Bass, he was in contact with us night and day. I thought he left all his work and he was only with us—calling to us, sending messages to us, and finding a way for us. He was in the U.S.A. but directed us in the Kabul airport, too: You can try another gate; you can go another way.”

For days, the three women hid in a sewage ditch 10 feet deep with other women, small children, and babies. Fatima’s glasses were broken in the filth and chaos. Finally, a Marine pulled them out and helped them through, Zahra says.

Ten days after the women arrived in Kabul, Bass received a message from Zahra that she and her mother and sister were boarding a military plane.

Then, for nine days, Bass heard nothing.

The next message that came from Zahra read: I am at somewhere named Dulles. Where is this?”

He said, “You’re in America.” The three women were transferred to a military base for 3 months of processing.”

And the day before Thanksgiving, Andy brought them to his home St Louis. “Since then, Bass has helped them get Social Security numbers and employment authorization documents, figure out health insurance and make doctors’ appointments, call around to potential landlords, and enroll in English classes at St. Charles Community College. They got jobs at Schnucks; Zahra and Fatima are working in the deli, and Bilqis in the bakery.”

But this is just the beginning of a new chapter in their lives.

Human kindness starts in our hearts and our ability to show up in life. We never can know where anything leads but one chance encounter can change the trek of three women in Afghanistan, which can then create many ripples. If we simply consume information not much happens but when we care our lives become richer.

My friend, MK Hicks responded one day to a Daily Trek email and we jumped on a video call. After we talked she introduced me to Andy and Zahra, who she met through Startup Grind.

I don’t know about you but I want to live in a world with billions of Andy, Zahra and kind people who care deeply. When I asked Zahra about her dreams, she shared that she wants to live in a world where we are kind to each other. A world where there is not need to advocate for women and children because everyone has rights. But the road ahead is long and filled with possibilities.

Zahra receives over 20 messages a day from people back home begging for help and a way out. She is concerned that there are so many refugees right now from so many countries. The need for kindness has never been greater. Here are some ways to help:

And if you have other ideas on how you want to get involved, I’ll be thrilled to put you in touch directly.

Andy and Zahra’s fates are connected through a chance encounter but there are no accidents. By signing up for the marathon and deciding to come a week early, Andy came across the women’s market and the rest is a life of possibilities. We never know what we are made of  until we choose to trek into the unknown.

The need for kindness is around every corner when we open our eyes and hearts. It’s the people of the world needing refuge from persecution and also in our local communities. It could be as simple as truly seeing someone and listening to providing help. Kindness and generosity have no limits. But the key is to practice our humanity. We can’t continue to be outraged by injustice as it’s our time to consciously act.

When we remember we are powerful creators on this planet, despite our circumstances, life changes. And it’s up to each of us to author our own stories, no heroes required, just love and deep caring. The human spirit prevails as we take a deep breath and feel gratitude for the beauty that is here and what is possible.

We are the ones we have been waiting for. Leadership is not outside ourselves.

Pema Chodron reminds us that “Deep down in the human spirit, there is a reservoir of courage. It is always available, always waiting to be discovered.”