Tales from the Trek: The Power of Love 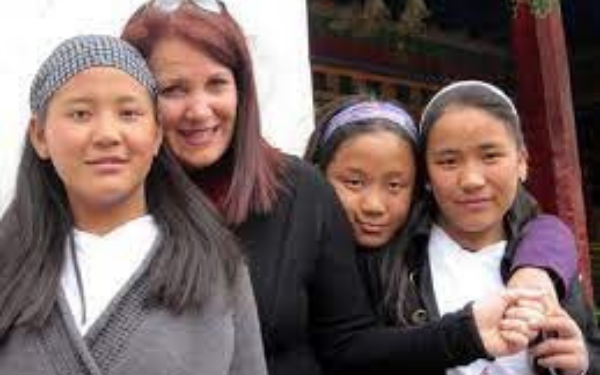 The Dalai Lama asked Arlene Samen to go to Tibet to help women and children who were dying during childbirth. This one request opened her eyes to the alarming mortality rate of Tibetan mothers and infants. She moved to Tibet and started One Heart World-Wide.  Arlene later took the life-saving model she developed to remote villages in Nepal and the Copper Canyon of Mexico. It is no surprise that she has received several awards, such as the Unsung Hero of Compassion from CNN.

I met Arlene Samen on our Jungle Mamas journey with the Achuar Nation of Ecuador to improve the health and wellbeing of mothers and newborns through women’s and local community empowerment. Arlene was one of the chief architects of the program introducing the Network of Safety model, a program that works with a connected network of families, communities, and local and national governments in the active engagement of reducing maternal and newborn death. I immediately knew I had found a new friend and co-creator for life.

Arlene Samen Shares Her Trek into the Unknown

This journey of mine is really about connection and being human. I’ve been a nurse practitioner for 35 years. I was minding my own business at the University of Utah, working in high-risk obstetrics, when one day I had the opportunity to go to India. I went with a number of plastic surgeons who were going to operate on several Tibetan children with cleft lip and palate. While we were there, we were asked if we would like to have an audience with his holiness, the Dalai Lama. And of course, we said yes.

Never in my wildest imagination did I ever think that the Dalai Lama would ask anything of me, but at the end of our hour-long conversation, he looked at me and said, “You’re a nurse, right?” And I said, “Yes.” He said, “You work in maternal health?” I replied, “Yes.” He said, “My mother had 16 children and 7 of them died. You must go to Tibet and help the women and children who are dying there.” I thought, “Wow. Okay. He must not really mean that.”

I went back to my life and put the conversation with the Dalai Lama behind me. A few months later, I received a letter from the Ministry of Health asking me to please return to India, which I did. They told me, “His Holiness meant what he said. You need to go to Tibet and help the women and children.”

At that time, Tibet was closed to the outside world. And I said, “Well, how can I do that? How will I even be able to get a permit to enter Tibet?” And then I remembered what His Holiness had said to me: “On the path of service, all doors will open.”

I had no idea what those words really meant, or the challenges that I would face along this journey. And indeed, the Dalai Lama was right. I found a doctor in Lhasa who got a permit for me and some other doctors to enter Tibet. Once I entered the country, I started hearing story after story about women dying in childbirth.

Although I worked at the University of Utah and that was what I did every day, I had no idea that globally, every 90 seconds somewhere around the world, a woman is dying in childbirth. Another 45 million women each year deliver without the assistance of a skilled birth attendant. It was astonishing to me that in modern society, women were delivering alone and that there was no one there to help them.

I convinced some of the doctors from the University of Utah to join my trip in 1998 to this unknown mystery land of Tibet, with no guarantee of what the outcome was going to be or what we would even be able to do while we were there. While in Tibet, it was revealed to us firsthand that every day, one out of 100 women would die in childbirth. And even more shocking was that one out of 10 babies died. We were outraged and wanted to find out how this could be happening.

When we dug deeper, we discovered that they were dying of causes that were preventable in the US and in most countries around the world: hemorrhage, hypertensive disorders, serious infections, or obstructed labor. But all these conditions were treatable and not expensive to address. There was no doubt in our minds that we could make a difference.

We started asking questions and spending time with the women. We found that over 95 percent of the women were delivering their babies alone, either outdoors or in a cowshed. There are a multitude of cultural and spiritual beliefs about childbirth that exist in every country in the world. In Tibet, the rationale for delivering the baby outdoors was the belief that blood from childbirth was polluted, and if women delivered within the home, the people in the home would then get sick and polluted by bad spirits.

We spent a lot of time with the people to understand their traditions and beliefs. We knew that we were not going to expect them to adapt to our ways, so we adapted to theirs. We designed the solutions together. We proposed having a clean delivery kit with a drape that they could use to deliver the baby on inside the home. We would also provide razor blades instead of using their knives; this way there would be no risk of pollution, as these items were later buried, which was part of their tradition.

We also proposed to have the birthing kits blessed by the local Tibetan Lama. They told us it would work for them. It was that one innovation that made the difference, that one thought process of reaching out to understand their culture and what worked for them, instead of asking them to adopt our culture. The birthing kit is now used all over Tibet, and women are no longer delivering outdoors. They deliver in the home with the clean birthing kits and a skilled provider.

We soon realized there was no tradition of midwives and women delivered alone or with an unskilled family member. We started the first Skilled Birth Attendant training program and started training the Women’s Federation to be the first line of health workers to recognize danger signs and enroll women in prenatal care. They came to be known as our foot soldiers.

People often ask us how we did it. It’s simple: we went to the people, we lived with them, and we loved them. And we helped them to come up with ways to address their problems, because there’s no one in the world who wants their mother, daughter, or sister to die in childbirth. When we were asked how we made it sustainable, I’d share that not losing a community or family member was a pretty highly motivating factor.

So much is possible when we see opportunities and care deeply and I am forever grateful to Arlene Samen who continues to impact the lives of so many generations.