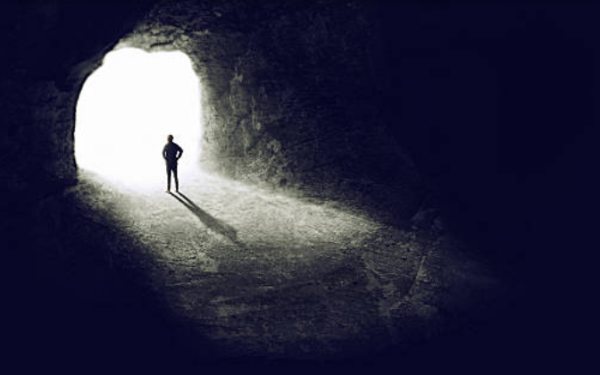 Today’s tale from the trek is about a personal transformation that not only expanded one man’s consciousness but is also helping many consider healthy perspectives on life.

To the outside world, Neil Elliott had every success one can aspire to—an amazing family life, a beautiful waterfront home and  a successful consulting business. Like many people in this world, his life became about working hard and earning a living to support his family and the lifestyle they chose to adopt.

But things are not always as they seem and at 57, he found himself facing his darkness and falling into a deep depression; questioning the point of life. “I worked hard but I was not getting ahead. I earned a nice living but I wasn’t not getting ahead. I felt I had this albatross or chain around my neck dragging me down, no matter what I was doing.”

He tried to snap out of his darkness by  looking for meaning and answers in scientific and spiritual books. One day, Neil came across a memoir of a woman who shared her story of a near death experience and her messages resonated with him. While he didn’t understand all of them, he felt that the message that we all come from love and return to love, and that we are not judged after death, gave him permission to end his life.

Life seemed so pointless that he began to plan his exit.

Neil’s wife was out of town visiting friends, their house just sold after years of being on the market and he had time alone to craft his suicide note at the kitchen table. He knew this ending would come as a shock. No one knew what he was going through as he hid his true feelings from everyone.

Like Bucky Fuller, he wanted to ensure that his wife and kids had financial stability and he wanted to also provide them with a goodbye that released them from blame.

Consciousness is Not What We Think

Neil crafted his note but for some reason, he kept thinking of a blueprint document he had just received that he felt calling him to explore a new process. He made a choice to postpone the suicide by a number of months and see what this process that bridges the gap between spirituality and science was all about. He began to do his work to transform how he thinks and address the areas where he felt stuck.

A year later, after jumping into not only studying consciousness but experimenting and practicing meditation, the depression was no longer with Neil. Being in stillness and silence taught him to relax his mind and body and raise his awareness.

Breaking Through to A Higher Road

Over the course of the following year, Neil lifted himself to an inner state of love, peace, joy, and abundance. His perspectives on life changed entirely. His troubles and tribulations were his impetus to find the key that enabled him to revolutionize his life.

He learned that the search for a better life does not entail positive thinking, saying affirmations, chanting mantras, or traveling to India to sit at the feet of a guru—or any other popularized method of “finding yourself.”

The key is to ascend in both spiritual perception and truth, you need to use a healthy process to break through your entrenched, human-ego barriers. Neil discovered a higher road and the key to transforming his life. In fact, he wrote a book on it entitled A Higher Road: Cleanse Your Consciousness to Transcend the Ego and Ascend Spiritually.

Regardless of your current situation or challenges—whether you are poor or wealthy, sick or healthy, joyful or depressed—you can find a path to a brighter, fulfilling future. Neil believes that as more and more people follow this Higher Road, a New Era will dawn throughout the world.

The conversation between Neil and Carol Chapman is available on the award winning podcast, Hearts Rise-Up.