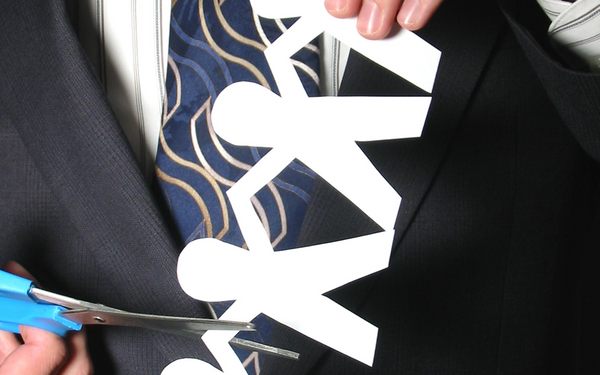 It’s easy to be frightened by headlines about a potential recession and a mass layoff of tens of thousands of people. And this fear is always alerting us to prepare for the next disaster in our external world.

The fear is being projected across the globe. But what if we peeked under the covers and asked a few questions, what would we actually see?

Maybe this is a reversal of a hiring spree that surged during the pandemic? And what’s interesting is that most tech companies are still larger than they were three years ago when it comes to the number of “headcount.”

Maybe long-term employees unexpectedly finding their access cut off to their beloved company is a workforce restructuring? Perhaps a slowdown is coming as a wake up call that we have been focusing on unhealthy growth?

While these are statistics, there is a very real impact on each person who was informed they were no longer needed or valued for whatever reason.

There are a million reasons and stories of why this is happening. But maybe what we need to remember is that all we can do is question. Despite all the noise of leadership and communication, what is happening is no different than decades ago. It’s all pretty much unconscious or maybe all the internal communication and leadership development employees were laid off first?

Although it used to be that we got laid off in a meeting with our manager and it was frowned upon to hold these meetings on a Friday. But this modern round of layoffs are happening over email, Slack, and other platforms. And few are being informed over a video chat or a Zoom.

Loss of access is now discovered early in the morning when the “communication” reaches the “affected” employees. Some have also shared openly they were having dinner when they got the news that their job was slashed.

In a digital world, companies want to make sure their trusted employees don’t take the company’s data with them so access is cut immediately.

The tech industry increased its public job cuts by 649% in 2022. It’s estimated that about 130,000 people have been laid off from large tech and media companies in the past 12 months. This is the highest since the dot-com crash more than 20 years ago. Maybe layoffs are trendy now for CEOs and why some call this the layoff parade? Obviously, the culture or the values don’t matter when people can be restructured or slashed due to cost cutting.

Trust is broken and breaking. How many of us know some impacted people and feel their anguish? Many loved their jobs and companies.

The headlines and panic around a recession and more layoffs needs to be questioned. Maybe this is an opportunity to step back and not buy into the fear?

What if we become aware that every choice we make is contributing to a future that can be healthier than the past? Maybe tens of thousand of people will make healthier choices now that they face a new reality? There are lots of people who need support right now; not just ones in the fresh round of cuts.

Maybe we are here to create the future of work and leave a healthier living legacy for future generations? And can we stop reliving these stories by creating what we need?