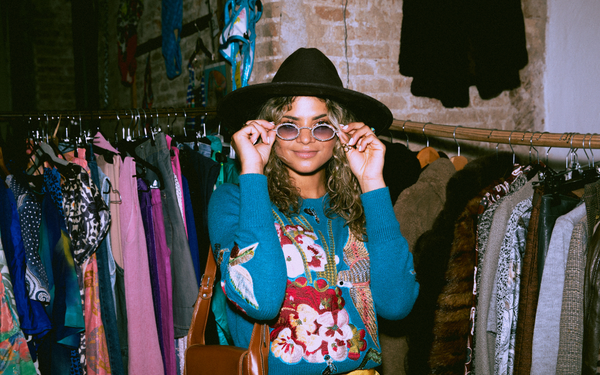 Thrifting is in Fashion

When I was a theatre major in university, I would secretly go to thrift stores and create some radical outfits. But it wasn’t called thrifting—choosing to buy secondhand clothing instead of fast fashion—back then. I also frequented local second hand bookstores and devoured scripts, plays and books. I had no idea that many years later, thrifting would become so trendy.

Fashion is the second largest polluter on the planet and as we become aware of this fact, we may reject cheap textiles and the careless consumption of clothes infused with toxic chemicals. And overloading landfills can be reduced substantially. As we begin to care about our sustainable impact on the environment, conscious choices are being made about what we consume.

And for some, used items are cheaper and what we can actually afford. Most thrift stores offer affordable pricing for secondhand clothing and many household items, including furniture and electronics, at lower prices. Sometimes, the original price tags are still on clothes or pans and pots that have never been used.

For many, buying second hand items saves money. And it is also trendy to buy used items that promote sustainable fashion and the environment. Older items were sewn or built to last.

When it comes to clothes, the probability there will be two of the same kind is extremely low. Shopping for vintage items in thrift stores means finding unique items that no one else owns. And many find this appealing.

Surging inflation is also pushing people to be thriftier. The report found that those born between 1997 and 2012 shop the most at thrift stores, making up more than 40% of global consumers.

With more people stuck at home during the past few years, there has been an increase in people cleaning out closets and also making different choices about what we need. This contributed to an increase in donations once thrift stores began to accept donations again. Maybe we don’t need as many pots and pans and we donate them to a thrift store where they can have another life?

The etymology of “thrift” comes from 1300s Middle English “fact or condition of thriving,” and “prosperity, savings.” Its origins can be seen as using resources to prosper. Despite its existence in earlier times, the modern idea of thrifting was fully created in the mid 1800s to the early 1900s with founding of organizations such as Salvation Army and Goodwill.

The 120 year old non-profit Goodwill launched GoodwillFinds, an online platform for thrifting at home, this past week. Their goal is to offer over one million items and create a customized portal of secondhand items. In 2021, retail revenue from donations to Goodwill was more than $5.4 billion. GoodwillFinds follows in the footsteps of ShopGoodwill, which launched in 1999 and sells many items via auctions.

Pawn shops are also booming right now as more people choose to sell items to survive. And there is an increase in pawn shops are loaning more money out on collateral. There is an air of desperation involved as people are facing higher prices from food to gas.

But Maybe There’s Something Deeper?

Seems like many people are being disrupted right now and each circumstance is different. Some are shifting out of pure necessity, while some are becoming more conscious by questioning everything.

And becoming more conscious means being part of the circular economy, which is based on three principles: design out waste and pollution; keep products and materials in use; regenerate natural systems.

The bottom line is that our relationship with material possessions and our drive for sustainability and regenerative systems will go beyond these superficial consumer trends. Many of us want less stuff and more meaning through experiencing the mystery of life. We are learning to take only what we need as we connect with our natural environments.

We are becoming increasingly discerning and finding ways to live fuller lives by not attaching ourselves to materialism. Simplicity is making a comeback and it’s all about the choices we make. We can invest in experimenting and exploring higher plains of existence or stuff ourselves with more and more stuff. There’s no prize for being frugal; being conscious can simply become a healthy way of life of knowing our enough and only taking what we need.

At the end of the day, all we take with us is our experiences and the state of our wellbeing depends on them. As we enter the second week of October, our theme continues to be on meaningful relationships this month; with our stuff, ourselves, each other and our beautiful planet. What and who we consume matters deeply as we navigate these times.