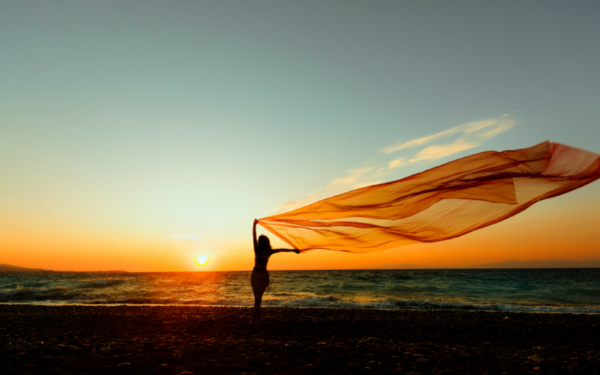 Wake Up Call to Living

Many of us believed we were on a certain path. We planned on staying in the same profession, relationship or home forever. Making a certain amount of money meant responsibility and brought what we thought was safety. Vacations to exotic locations and bucket lists to check off became our dreams. What more could we ask for?

Everyone around us may think we have it made and maybe we do? But we are no longer 100% sure. There may be some new questions emerging, which we can no longer silence. We find ourselves in between worlds.

Helen Keller in The Open Door, wrote,“Security is mostly a superstition. It does not exist in nature, nor do the children of men as a whole experience it. Avoiding danger is no safer in the long run than outright exposure. Life is either a daring adventure, or nothing at all.”

Playing it Safe is Often Risky

For people who worked in offices, initially not having to commute every day may have been welcomed. But when offices were shut down in March 2020, the co-workers, the perks, travel and socializing vanished. And it became all about the meetings and the work, which for some became mundane and soul crushing. Some wanted to learn and felt stuck.

It was an opportunity for managers to step up and redefine how work was done with open conversations and dialogue. But when there was no listening and increased isolation, dissatisfaction increased. And many had more space to dream and reflect deeply.

Life and death became a daily reality and being present a new way of life. A realization that if there is something we dream of doing or being, there may be no other time than now.

A Wake Up Call

I meet so many people who want a change and share that what was important to them no longer has the same meaning. Even my ride-sharing driver just a few hours ago confided that she was leaving her job at a well-known tech company because she feels stuck and being the only woman on her team is exhausting for her. I listened, we talked and Lauren jumped out of the car to give me a hug when she dropped me off.

The bottom line is that instead of working for someone, she wants to build things that she is passionate about. Doing what she loves and growing while she does. And by working on what energizes her, Lauren is wanting to focus on learning and earning.

The wake up call that is taking place is two-fold. First, not everything is as it is seemed or promised. And second, there is a growing realization that there is a cost to everything. Playing it safe is the riskiest choice of all. When you play it safe, you are just as exposed to all the traps and dangers, but you have limited chances to experience the upside.

“There are two questions that we have to ask ourselves,” according to Howard Thurman. “The first is, ‘Where am I going?’ And the second is, ‘Who will go with me?'”