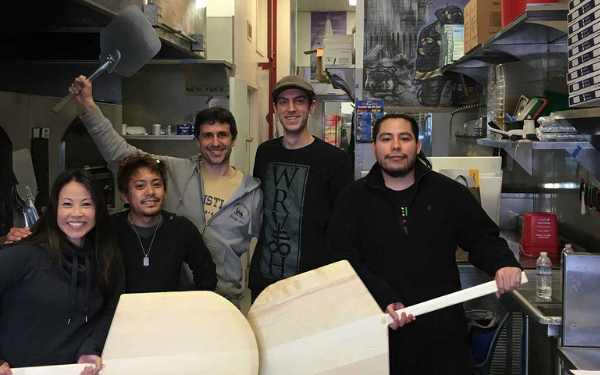 Another Way: The Worker Co-op

The article got my attention for two reasons: 1) I worked with Kirk on many projects in my first role at Cisco and I am so excited that he went out in the world to create something he needed (great pizza! and a healthy model) and 2) how exciting is it to see more humane models emerging in our world, especially ones that will help young people transition family owned businesses in the long term.

From the article in The Silicon Valley Voice:

“While Vartan is the general manager, three of the five other workers here are also owners. That is because, in 2015, Vartan floated the idea of the pizzeria becoming a worker co-op, offering employees a chance to become owners of the local mainstay. Although he was unsure if this was something his team wanted, nearly half of the then 15 employees put their names on the signup sheet indicating interest.

After nearly two years of hammering out details, A Slice of New York (ASoNY) converted to a worker co-op in 2017, making it the first brick-and-mortar worker co-op in Santa Clara County.

“I like collaborating with people and organizations to create a common goal,” he said. “I treat people as ends, not as a means, in general. I don’t look to exploit anybody. Your people are everything. It is not about your product.”

While he had envisioned ASoNY as a co-op from the early days of opening the pizzeria with his wife and co-founder Marguerite Lee, his attorney advised against it. The worker co-op model, he said, already aligns with how the pizzeria operates, so, in 2015 he suggested converting the shop to a cooperative.

Working with Project Equity and investing roughly $50,000 to make the conversion took nearly two years. When it was done, ASoNY became the first business in Santa Clara County—out of more than 160,000 businesses— to turn its equity over to employees.

“We wanted to use this as an example of how others could do this,” Vartan said. “There [are] no tools to help small businesses right now. This is the first tool the city has to give small businesses options.”

In order to become members, that is buy into the business, employees need to meet a few requirements. They need to have been employed at the company for two years and on the schedule for at least 25 hours a week for a year, having worked 1,200 hours.

Then, the candidate pays a $750 deposit that the company keeps if the candidate leaves before the end of two years. After a year-long candidacy, provided they are approved by a 75 percent supermajority of the board, they pay the remainder of the $3,000 member fee. If the member wants, the business will deduct that fee from payroll over two years.

Just like anything, worker co-ops cut both ways, Vartan said. There are perks. There are drawbacks. For him and his wife, they don’t have full control over how to spend company money. Members need to be engaged because, unlike someone who is simply an employee, they are vested in the company’s success. Taking an “I just work here” attitude is not a viable option.

Vartan has been an evangelist for the worker co-op model ever since converting, lobbying for its use across the Bay. He was instrumental in getting the Santa Clara City Council to pony up $100,000 toward a worker co-op initiative. He has even led co-op workshops at Mission College in Santa Clara, touting the model for would-be entrepreneurs.

“We have seen first-hand the impact [of the high cost of living] on someone who is trying to work and survive here. Even with [a $60,000 yearly salary], you can’t survive in this area. There is no way for them to get a foothold here unless you work in tech,” Vartan said. “This model, to me, is an answer nobody knows about.  I believe in this structure. I am kind of going on faith here. I don’t expect anybody to share that, to have that blind faith without understanding how it works.”

On Project Equity, Kirk shares: “Our job is to make people happy. That’s all we do.”

From attending employees’ band performances to hugs at the end of the day, Vartan and Lee think of ASONY as their chosen family and have, from the beginning, invested in not just the business but the people who work there.

One of their greatest rewards has been to “see how our business has been able to give people the ability to create a life that they like.” And employees have returned that care and investment with their loyalty, many working with the company five or more years, so far. One employee, Miguel Rubio, has been with ASONY for ten years, since the beginning; Vartan and Lee’s small business helped him pay for college.”