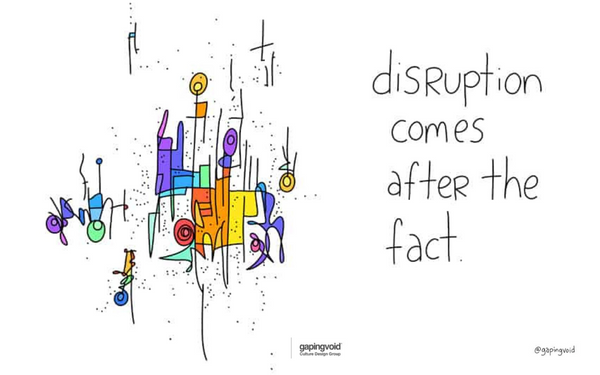 The Playlist is a docu-drama mini series on disruption. It focuses on how Swedish Daniel Ek became one of the most “powerful” men in music by creating Spotify, the first music streaming platform.

It is a different story than the typical American tech start-up of success. Instead of having the American hero or villain at the center, it tells the story from five different perspectives: the Swedish music industry executive, founder, lawyer, coder, investor and musician. It shows that there was a team of people who actually birthed Spotify and each one played a role and shares a version of what happened.

The coder in this story, for example, always wanted a self-organized team with no titles focused on creating something meaningful. And on our screens, we experience his heartbreak as the initial promises transform into another monolithic organization structure. All of a sudden everyone had a fancy title to appease the market and the ego. So much for real transformation and human needs.

It makes us wonder whether the hero’s real motivation was disrupting an industry or eating a messy hot dog bought from a food truck in his new red Ferrari?

What Are We After?

After being rejected by Google for not having the right background and education, the script tells us that Ek was sparked to prove that he can be a disruptor. He envisioned that every song in the world could be free and accessed immediately.

And this is where this concept rubbed Sony’s executive the wrong way as the thought of free music by the record labels was gut wrenching. It wasn’t as much concern for the artists but more about maintaining a steady revenue stream for the studios. Growth is the name of the game.

Airbnb owns no properties. Uber drivers own their cars and must abide by the company’s standards.

For some reason unless we are a famous celebrity, artist, musician, business person and so on, we get commoditized. And this is what happens to the creators in the past and right now.

While everyone is fighting to get a share of the pie, the creator (worker) is the one not at the table. Is this why so many young people dream of being rich and famous? And why not much will change if we wait to be disrupted.

We have the manmade construct of starving artists who sacrifice material well-being in order to focus on their art. But why should anyone actually starve?

And disruption is so interesting. We tend to go to extremes. We either set out to disrupt entire industries like music or we stay close to home and disrupt what we already know.

For example, we have an opportunity to imagine and create new delicacies with mushrooms and fungi. But instead we offer substitutes to what we already know like bacon. A new company is offering a vegetarian-friendly bacon substitute made from mushroom roots.

And when I talked about why not create something radically different with a friend, her insight was that we tend to prefer the known over the unknown. But then why are so many promoting crickets—eating insects—as the next best thing to get our protein intake?

Maybe there’s someone already dreaming about a docu-drama series on how they disrupted the cricket industry with vegetarian crickets made from fungi?

Disruption at the Core

What if disruption is simply part of life? What if we are always curious and ready to explore?

But the difference may be between the two worlds we are currently navigating. Many of us:

1) continue on the current trajectory of disruption and innovation for growth and profit.

2) While, some of us are letting go of everything we know. We imagine and create a totally healthy new world where disruption simply helps us serve every living being on the planet in amazing ways. We celebrate the quality of our life and connection to meaningful creation.

It’s already happening in pockets and we need to wake up and question everything with lightness. Did you know that the world’s healthiest, most biodiverse, and most resilient forests are located on protected Indigenous lands. A new study suggests that protecting Indigenous and human rights is key. When Indigenous peoples are given legal and financial support for land management, the results benefit the world. Please let’s not disrupt our forests and land in the name of progress.